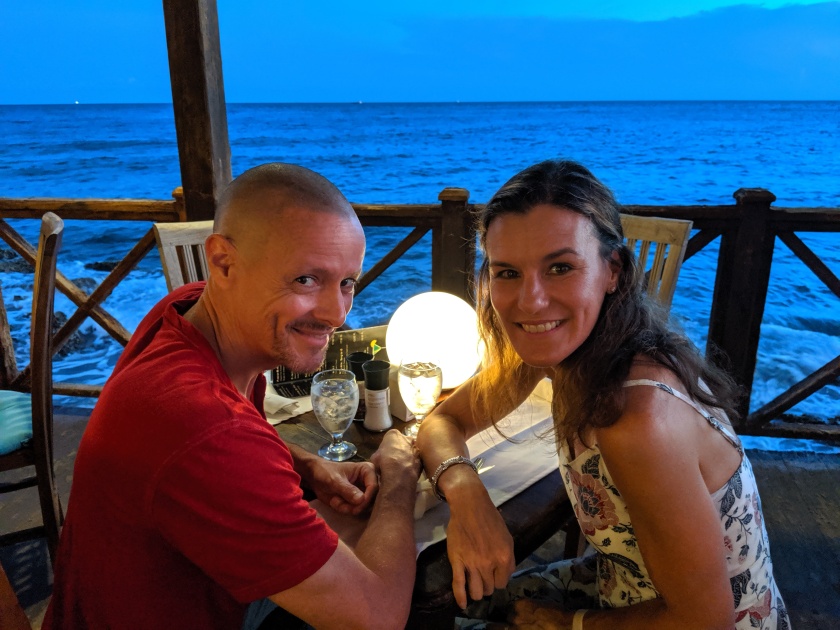 After much debate about where to go first, Cody and I chose Saint Tropez for one of our dinner dates during restaurant week. I was biased, because of the salmon and then saw chocolate truffle – done!

Unfortunately, the decision was the easy part. When I tried to make a reservation online, I saw that they only had lunchtimes available. I quickly chose one for Saturday, since we work during the week. When that Saturday arrived, we frantically rushed kids around to athletics and activities so we could find a small window to steal away to have “dinner” for lunch.

When we arrived at Saint Tropez, they informed us that the “Restaurant Week” menu was only available for dinner. Trying desperately to have a good attitude (I REALLY love salmon and chocolate!), I explained how lunchtime reservations were the only ones available. To my amazement, they just shrugged and rescheduled us for the evening! They didn’t seem to mind!

Even though I was really upset about the whole process (and hungry – never good for me!), the views are amazing and the menu was enticing, so we rescheduled for that evening. This was a bit of culture shock for us, as this situation would have never been okay in the States.

We came back that same night … at 8:00! Those who know me, this is WAY LATE! At night, you don’t have the same views, but the restaurant lights up a bluish-purple. It had a nice atmosphere, but I missed seeing the water.

I included our menu of choices, but their regular menu is much more substantial. Cody ordered the soup, Ossobucco Milanese, and Banana Cake. Unusual for us, but we went completely opposite! I ordered the rolled chicken, salmon, and chocolate truffle. The rolled chicken had a nice flavor but was slightly overcooked. The salmon and chocolate were quite tasty. Cody seemed to enjoy his meal, but we needed to get home, it was WAY past our bedtime!

We have been to Punda many times, but we had yet to visit the water while we were downtown. I’m so glad we finally did! I mean really, look at the pictures. The atmosphere here was perfect.

We chose Perla Del Mar for the menu. I have heard they are known for their seafood, but I am not as adventurous as Cody with seafood. I like fish, shrimp, crab, and lobster. After that, it gets a little too weird for me. As always, the restaurant has a more extensive menu regularly, but we were there for Restaurant Week.

Cody chose the seared octopus, Sicilian seafood rice, and fudge cake. I had the salad, sirloin, and key lime (actually, Cody ate both desserts). The food was good, but the atmosphere was definitely the highlight. I took a bite of the key lime pie and it was delicious. I really wish I could gluten it up, but I had to let Cody finish it. He really enjoyed his seafood rice. So, as others have said, Perla Del Mar probably does excel at seafood. We really enjoyed our evening, even though our waitress forgot we were there at one point!

After seeing the menu, we chose Brakkeput Mei Mei for our whole family to enjoy.

This was a winner! The WHOLE FAMILY loved the food, all the courses, and no food was left behind! We will definitely go back. Plus we noticed that there is a putt-putt course in the complex.

Everyone, but Rhys, had the salad bar. While this is not similar to a salad bar in the United States, it was quite delicious. It had some simple salad items, but it also had slaws, meat salads, and crab salad. Rhys really enjoyed his toast a brie. He sort of picked off the onions, saying they were too sweet, but I ate them and they were PERFECT! All of us but Rhys ordered the steak (see a trend happening?). PERFECTION! The salmon did not look terribly pleasing, but I tried a bite and it was quite deceiving: perfectly seasoned and cooked well. We divided on the desserts as well, kids went Oreo and parents went banana split. Both were divine. Rhys was busy trying to scrape every last bit of ice cream from his plate when the waiter walked by and suggested he pick it up and lick the remains. 😆 I did stop him from complying.