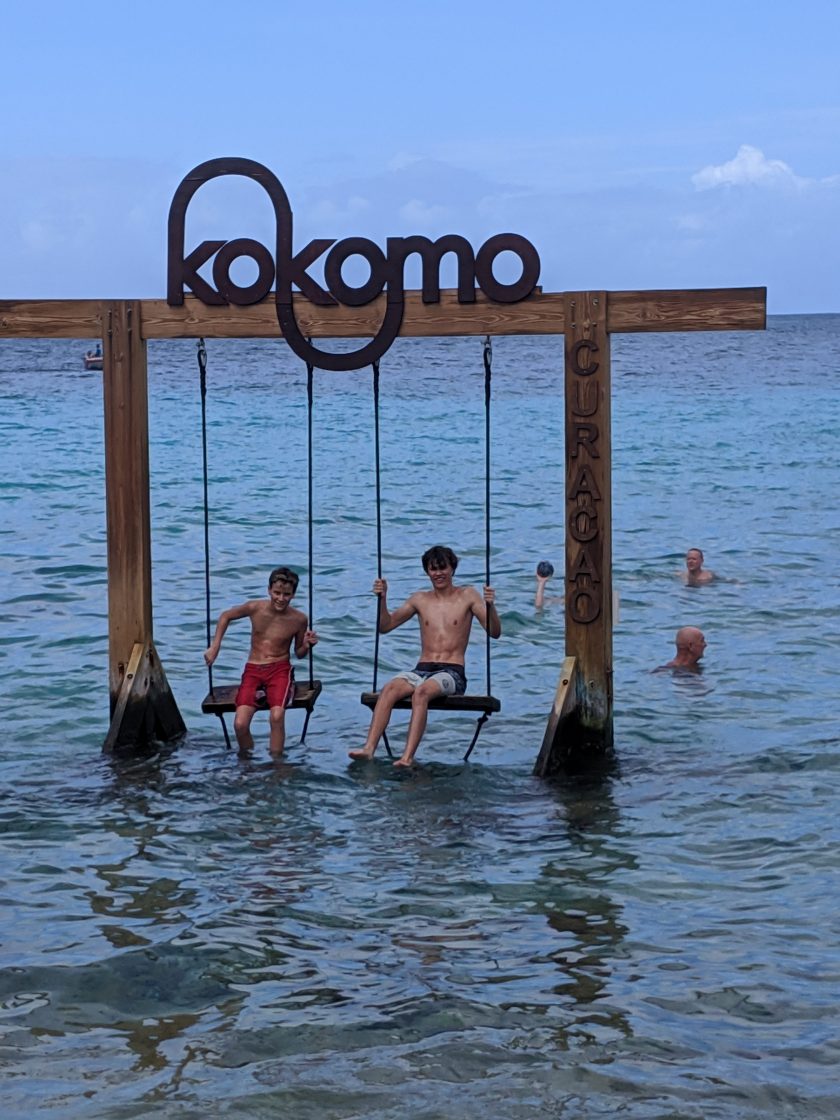 Saturday night, the family and I decided we would have a beach morning the next day, no matter what. That night it poured! Seriously! We have yet to see more than a 3 minutes’ drizzle here, but it came in a flood in that night. Sunday, while it didn’t rain, it was still a little overcast. Honestly, it turned out to be a positive! Yes, the water was cooler than expected, but the sun wasn’t so harsh that we had to leave the water!

We chose to go to Kokomo Beach, mostly because I visited in February and had a picture of the swing in the water, which the boys insisted on seeing. When we arrived, we learned that the beach and parking are free, but you can’t bring in a cooler, food, drinks, or chairs! So we took all our stuff back to the car, one of us (me) might have tried to catch the iguana and roosters in the parking lot (not successful). With just our towels and books in hand, we took in the entire view.

On the beach, you can pay $5 US or 7.50 guilders for a lounge chair or you can sit in free rattan chairs. The lounge chairs are available in the shade and in the sun. We arrived about 10 am on Sunday and had tons of choice. In fact, the beach remained fairly calm through lunchtime.

When we actually got in, bought two chairs, and were getting settled, we realized that we had packed my oldest child’s hooded towel from when he was one, instead of a beach towel. Thank goodness he found the humor! I suppose that is a must-check item now.

At Kokomo beach, there are swings over the water. These are mostly a photo opportunity. You aren’t meant to really swing on them. I personally didn’t try to get on one, because I watched Rhys struggle to get on. He got out there and then was trying to pull himself off. He fell over a few times (yes, I laughed), but he finally got up. I’m fairly certain I don’t need that kind of embarrassment in my life, so I just took pics of the kids!

The swings were fun, and the boys know to appease me by smiling for pictures, but the real fun at Kokomo Beach was the small waves and the floating platform. The sand on the beach is soft, but when you first get in the water, it is really rocky and uneven, so it was a little hard to walk out enough to start a swim. However, the water is ridiculously clear!

We all swam out to the platform, where we are guessing it was about 8 feet deep. You can see the bottom of the ocean PERFECTLY, even at 8 ft! The boys practiced flipping, throwing a ball around, and timing jumps. While there, we met a lot of other people and everyone began playing a game together on the platform. Language differences didn’t stop the fun!

This beach will be a must return for us! The boys enjoyed playing football in the sand, the clear water, and the platform. We didn’t check out the restaurant this time, but they have burgers and simple meals as well as tons of drinks. It was a bit pricey, but one day we will spoil the crew! We’re not really into massages and we don’t know how to scuba dive (yet), but those were offered on the beach as well! If you’re in Curaçao, check out Kokomo Beach.